Gold price prediction 2022 and in future: Will the dollar keep putting it down?

This article will dive into the gold price prediction 2022 and in future, including price projections from analysts. Read on to find how gold is expected to trade for the rest of the year and in the longer term.

The gold market narrative has been driven by the contrasting effects of continued high inflation and central banks hiking interest rates to counter it. How will a strong US dollar (USD) affect the gold price?

With the US dollar recently hitting multi-year highs and Treasury yields rising above 4.2%, gold prices dropped to around $1,680 an ounce, as the US Federal Reserve (Fed) looks set to continue hiking interest rates.

Following the Federal Open Markets Committee (FOMC) meeting on 21 September, Fed chair Jerome Powell stated: “Today, the FOMC raised its policy interest rate by three-quarters of a percentage point, and we anticipate that ongoing increases will be appropriate.”

In the past few months, a stronger US dollar has contributed to the commodity’s downward momentum, but the fundamental reason for most analysts not having a bullish longer-term perspective on gold – rising US Treasury yields – remains intact.

What are the prospects for the gold market for the rest of the year, given the current macroeconomic and geopolitical environment? Should you invest in gold now?

In this article, we look at the recent drivers and gold price predictions from commodities analysts. 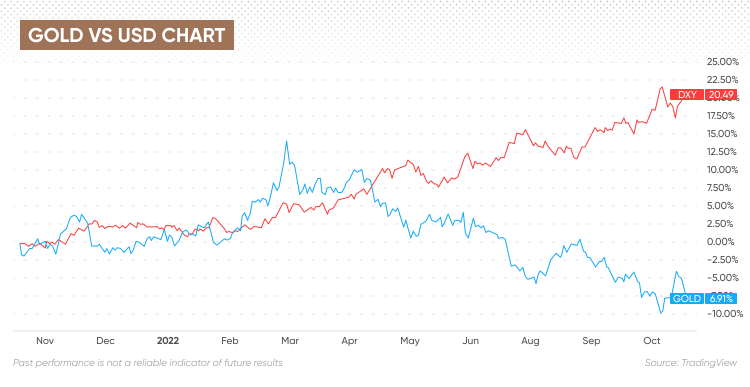 As the markets opened following the 4 July weekend in the US, the gold price dipped below the $1,800 mark for the first time since early February. Gold tends to trade in an inverse direction to the US dollar, as it becomes more expensive for buyers with other currencies and does not yield interest.

The commodity continued its decline into mid-July, marking the longest losing streak for gold since November 2020, after fresh signs of accelerating inflation encouraged bets that the Fed will take further aggressive steps to tame price increases.

The commodity fought back for modest gains and on 14 September 2022 spot gold prices inched down to $1,700 per ounce – the lowest level in over two years.

The price of gold has been largely influenced by a stronger US dollar index (DXY), as the Fed raised interest rates by 75 basis points (bps) for the third consecutive time at its September meeting.

The dollar has benefited from the uncertain macroeconomic environment, with concerns about high inflation, the prospect of recession, slowing growth in China and the impact of the Russia-Ukraine war prompting investors to sell other assets in favour of holding dollars.

The DXY, which measures the performance of the dollar against a basket of other currencies, peaked at the 114.68 on 28 September – its highest level since April 2002.

“Gold competes against the bond markets as a safe haven… a potential rate hike of 75 to 100 basis points by the [Federal Reserve] might make the bond market a little more attractive to safe-haven buyers than the gold market would normally be.”

The US central bank is likely to raise borrowing costs faster and further than previously expected, after Consumer Price Index (CPI) data released on 13 October showed underlying inflation is continuing to grow. The CPI rose 0.4% in September on a seasonally-adjusted basis, according to a report by the US Bureau of Labor Statistics, showing growth of 8.2% year-on-year (YOY).

The CPI is the most well-known indicator of inflation, measuring the percentage change in the price of a basket of goods and services consumed by households.

“Markets underappreciate just how entrenched US inflation has become and the magnitude of response that will likely be required from the Fed to dislodge it,” economists at investment bank Nomura wrote in a note quoted by Reuters.

Nomura’s analysts reportedly believe that a 100bp rate hike is the most likely outcome, predicting that the Fed will need to lift its policy rate to 4.5% to 4.75% by February 2023. Notably, Nomura also called for a 100bp hike in July, which turned out to be wrong.

The central bank has shown no signs of easing off on its current policy direction. At a press conference on 21 September, Federal Reserve chair Jerome Powell reiterated that the Fed was “strongly committed to bringing inflation back down to [their] 2% goal”.

Powell’s speech appeared to be a clear sign of the Fed’s intent to bring runaway inflation in the US under control, further boosting the dollar against most major rivals and denting the market appetite for gold.

A recession would be supportive to gold prices, but the sharp increase in interest rates being used to tackle inflation has so far been limiting the upside for the precious metal.

As noted by the German firm Heraeus:

“A recession is not necessarily bad news for gold. Typically, precious metal prices decline during recessions, including gold. In the 1980 recession, the gold price did decline (by 6%) but that was partly because it had just reached a record price at the start of 1980 and the Fed had finally pushed interest rates above inflation.”

“However, in subsequent recessions the gold price has fallen less and recovered more quickly than the other metals. The gold price tends to be slightly higher at the end of a recession than at the start.”

The World Gold Council, the market development organisation for the gold industry, recently opined that the commodity will face two key headwinds. The council’s mid-year gold outlook outlined the following negative factors that could exert downward pressure on gold:

However, the council also noted that the potential negative effects from the above may be offset by other, more supportive factors, including: 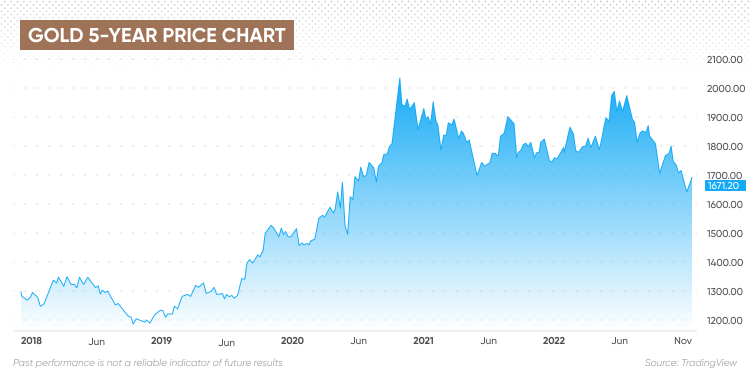 How is gold expected to trade for the rest of the year and in the longer term?

Let’s look at the latest predictions and price projections from analysts.

Gold price prediction 2022 and beyond: Should you buy or sell the gold?

Capital.com market strategist Justin McQueen gave his view on the potential price range for gold in a video update on the commodity on 12 October. He also outlined a number of support and resistance levels to keep in mind:

In a piece dated 1 September 2022, Capital.com analyst Piero Cingari pointed to seasonal trends that might support the gold price before the end of the year:

“The precious metal has shown a 1.6% average return in January, looking at the last 50 years of data. December also shows a strong seasonality (+1.5%), followed by May (+1.3%) and September (+1.2%). The likelihood of gold prices delivering positive returns in December and January has been 59% and 55%, respectively, reinforcing the strong seasonal pattern in these months. Cultural factors underlying the Indian wedding season are what make December and January bullish months for gold.”

“If the price action stays positive over the next few sessions, the MACD [Moving Average Convergence Divergence] could form a bullish crossover below the zero line. This has given the precious metal some short-term breathing room when it occurred previously this year. “

“However, strong dynamic resistance is provided by the 50-day moving average, which is located at $1,746. This zone is near the bearish trendline from March highs, which saw heavy selling pressure when it was touched in mid-August. “

“Overcoming the $1,750 barrier will continue to be the key resistance for gold prices in the short run. Instead, gold prices must decisively clear the 50% Fibonacci retracement level (2022 low to high), which also sits at June’s highs, to materially reverse the major bearish trend.”

Analysts at German technology group Heraeus outlined their thoughts on gold’s potential future in their Precious Metals Appraisal on 10 October:

“Year-to-date returns for gold priced in pounds sterling are 11.4%, 7.5% in euro terms and 18.3% in yen. Comparatively, the S&P 500 is down more than 20% since January. Despite gold’s outperformance, precious metal investment vehicles have been experiencing significant outflows in most regions as safe-haven demand continues to waver. Globally, more than 7 moz [million troy ounces] has been removed from gold-backed ETFs year-to-date. The gold price is expected to remain depressed in Q4 2022 as the Fed continues to raise rates. Consequently, ETF outflows are likely to continue.”

US-based Citibank was bullish in its short-term outlook for the gold price in 2022. The bank’s analysts wrote in their monthly market outlook on 4 July:

“Gold markets are not likely to inform financial markets of imminent recession. Whereas rates, inflation and FX are co-determined with some commodity prices (eg, crude oil), gold prices are reactive. Yet the negative performance of gold in recent months does not contrast with mean or median annualised returns preceding significant US growth contractions over the past four decades.”

As of 26 October, algorithm-based forecasting website Wallet Investor was slightly bearish in its short-term projections, indicating that the gold price could end 2022 at $1,626.80, a 2.5% decrease from the current price. The platform was more bullish in its long-term predictions for the precious metal, as its gold price prediction for 2025 saw the commodity rising to $1,951.35 in December of that year.

The website’s five-year gold price prediction indicated an average price of $2,166.36 by October 2027.

A gold price prediction from TradingEconomics expected the commodity to trade at $1,638.12 by the end of this quarter. The website’s macro models and analysts’ expectations saw the price of the precious metal falling to trade at $1,582.28 in 12 months’ time.

No analyst or algorithm-based website provided gold price forecasts for 2030.

When considering gold price forecasts for 2022, it’s important to keep in mind that high market volatility makes it difficult to produce accurate long-term estimates. As such, analysts and algorithm-based forecasters can and do get their predictions wrong.

We recommend that you always do your own research. Look at the latest market trends, news, technical and fundamental analysis, and expert opinion before making any investment decision. Keep in mind that past performance is no guarantee of future returns, and never invest money that you cannot afford to lose.

Is investing in gold a good idea?

Some investors might opt to keep some exposure to gold in their portfolio for diversification, as a hedge against a fall in stocks and bonds. However, whether gold is a suitable investment for you depends on your risk tolerance, outlook for the market and whether you expect it to rebound or fall further, among other factors.

Always do your own research and remember that past performance is no guarantee of future returns. Never invest money that you cannot afford to lose.

The outlook for the gold price will likely depend on how geopolitical tensions unfold and how monetary tightening affects the global economy, among other factors.

Keep in mind that analysts can and do get their predictions wrong. You should do your own research to make informed trading decisions, always bearing in mind that past performance is no guarantee of future returns.

Should I buy or sell gold now?

It depends on your view of the commodity. You will need to draw your own conclusions about how gold is likely to perform in the coming years. Remember that past performance is no guarantee of future returns and never invest or trade money more than you can afford.

Sign up for BTCC now to build your own portfolio!